The Rosy Cross ~ Cross of Dying in Upward Causality(QTOK)

The Rosy Cross of Dying in Qliphothic Upward Causality

Archetype D.) Qliphothic Negative White Cube Stone of Finite Contraction (The Negative Black Cube Stone) Qliphothic Tree of Knowledge, Relative Chaos, ½ of Heru Ra Ha - the subjective child.  This is the Outside of the Inner Cube/ the Front side, Kinder/Man as the Macrocosm and Paradox as the Microcosm

Paradox, being truly omnipotent, simultaneously destroys the inward manifestation as well.  This is covered in the Section: The Rosy Cross of Dying in Upward Causality.

In this Paradigm, we begin with the Rosy Cross in full bloom.  The image is flipped vertical, just as the Tree of Knowledge is, yet the colors are in negative image, for this is the Qliphoth.
This is the cross of Upward Causality, of Kinder/man as the microcosmic influence and the Divine as the macrocosmic Influence.  Here, Paradox as the parts, or particles, is the cause, and Paradox as the whole, or wave, is the effect.
The Qliphothic Force of Upward Causality travels in reverse, condensing that which has expanded, back into a singularity.
This is Kinder/Man consuming Paradox.
This is external contraction, collapsing towards the internal.

This is the Element of Earth, breaking apart into its component Elements.I.N.R.I. becomes I.R.N.I.  What does this mean?  It means that the alchemical principles separate to create each other.

Nothing is truly created or destroyed, only rearranged! 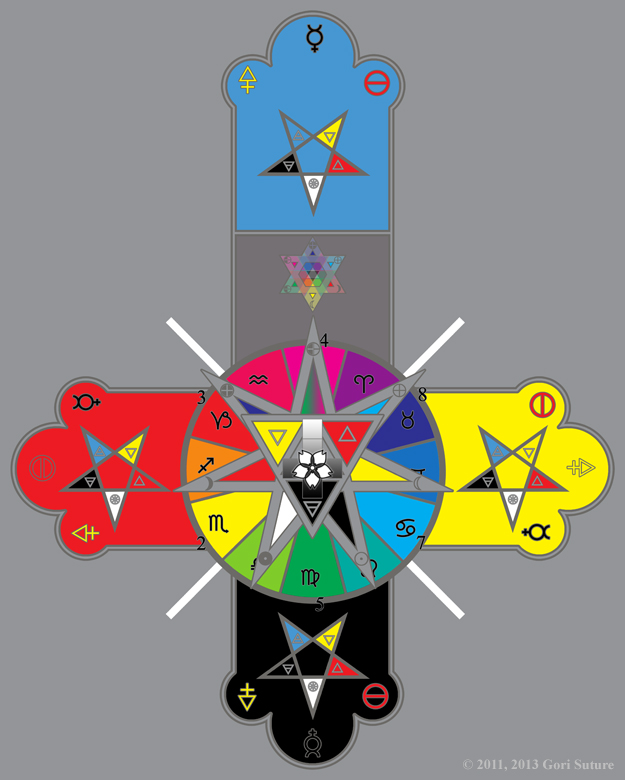 -8.) The Balanced External Contraction of the Rose Cross of De-manifestation

The Hexagram is removed from Tiphareth.  Devoured by self, the balance of the cosmos folds in upon itself and is no more.  This Hexagram is composed of the Primary color triangles of the Chaos Hemisphere, in negative image. 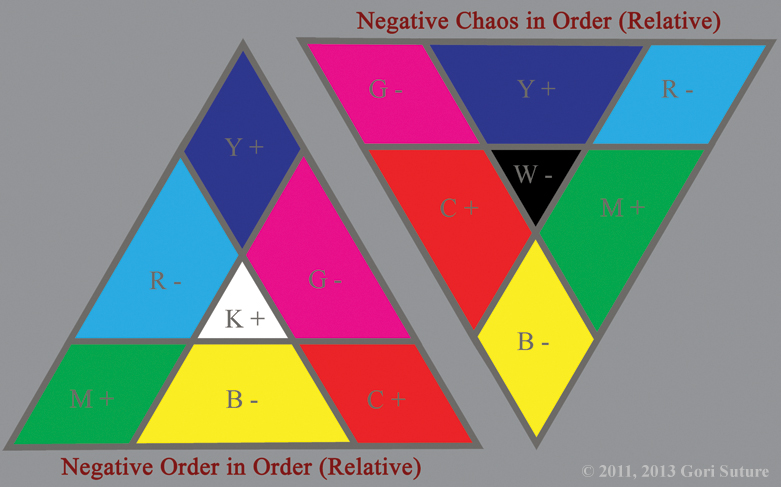 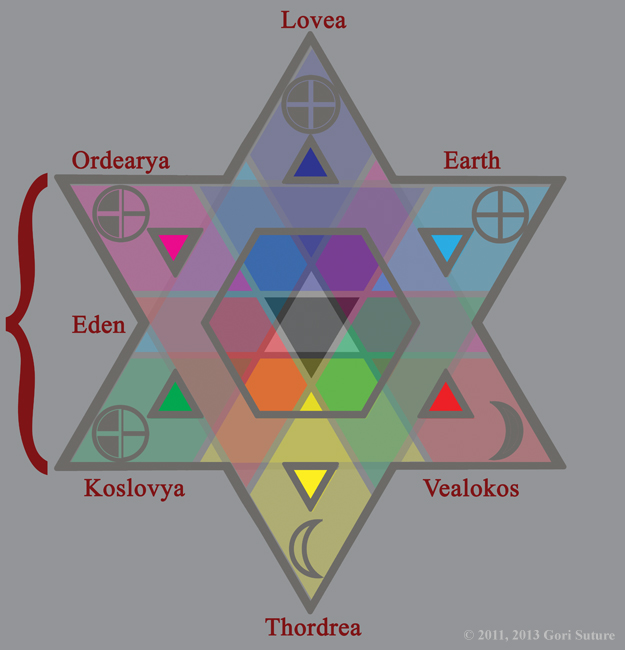 -7.)  The Elemental External Contraction of the Rose Cross of De-manifestation

This is the point where Kinderkind de-materializes.  What was once the corporeal is once again without flesh.  This can be through death, but it doesn’t have to be.  One can achieve an etheric state through meditation or other methods of the mind.
It is represented by the inverted Pentagram.  Whereas the upright Pentagram means downward causality, God descending into Kinder, the inverted Pentagram represents upward causality, Kinder ascending into God.   Tradition often calls this symbol evil, leading away from God.  But it is not evil.  Here, when the symbol is viewed in the Past Tense, from the goal of upward causality, once Kinder has reunited with God, then the Kinder can only look away from God, for the Kinder is already with and within God.
Kinderkind is de-crucified as the symbolic nails are removed. Thus, Upon The Great Cross, the Pentagrams within each square of the Four Elements are removed. 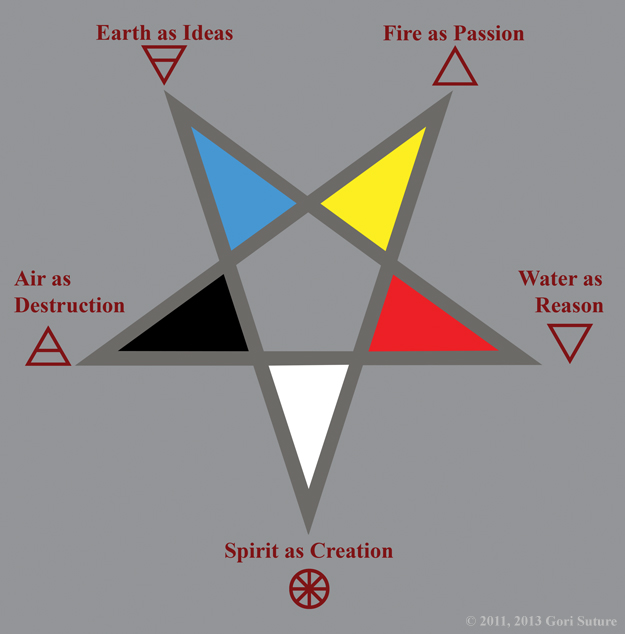 -6.) The Rose Cross of External De-manifestation

The Great Cross was formed of the six squares of the unfolded Positive White Cube Stone, and here, it is re-folding, for it is The Negative Black Cube Stone.
Here, de-materialization is complete, and de-manifestation has begun.
Thus, the Re-folding Cube now represents the muth phase, the de-forming (death) of matter.  This is recoherence (redintegration) from the chosen manifestation to the Superposition. 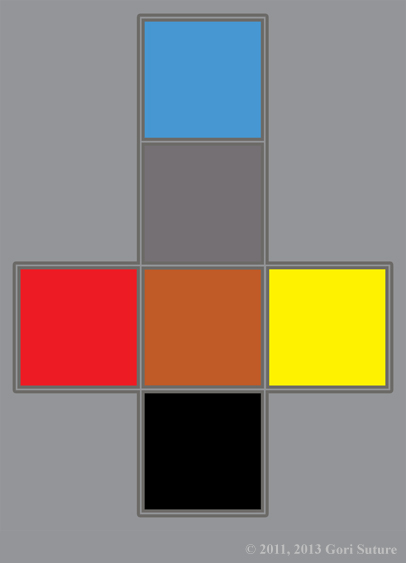 -5. ) The Celestial External Contraction
One by one, the stars go out in the heavens, as the past lives of Paradox are erased from history!  At this point, the Twelve Petals of the Zodiac are consumed, back into that from which they came.  Each sign was assigned a color, representing the center point of light, split, as if through a prism, into the various colors of the light spectrum.  Now, those colors of light rejoin one another.  Thus, the Twelve Petals are removed from the image.
In this paradigm, Positive light dominates, and we are analyzing the submissive light, the Negative light.  The Center represents omnipresence, and on this side, is Destruction (as Creation), aka Malkuth (as Kether), the “Destruction” of the Whole. In short, the Center is upward causality.  For more information on the Zodiac of Eden, see the Chapter on it beginning here: LINK 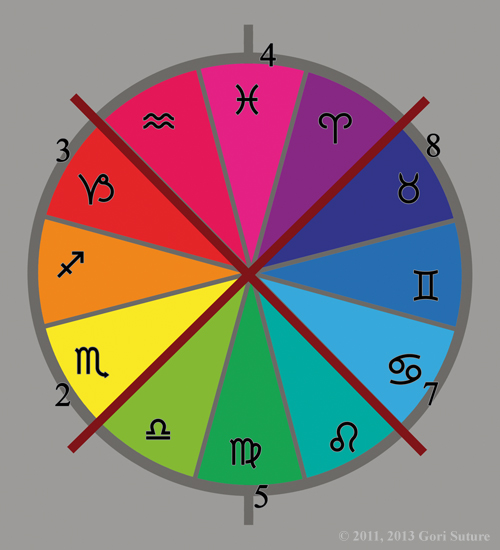 Seven Kinder died, a god of each planet.

Here, the Seven Petals representing the Seven Spheres of Vivification are removed from the image.  The very foundation upon which life was built crumbles to dust and decay, as the planets themselves are devoured by that from which they came. 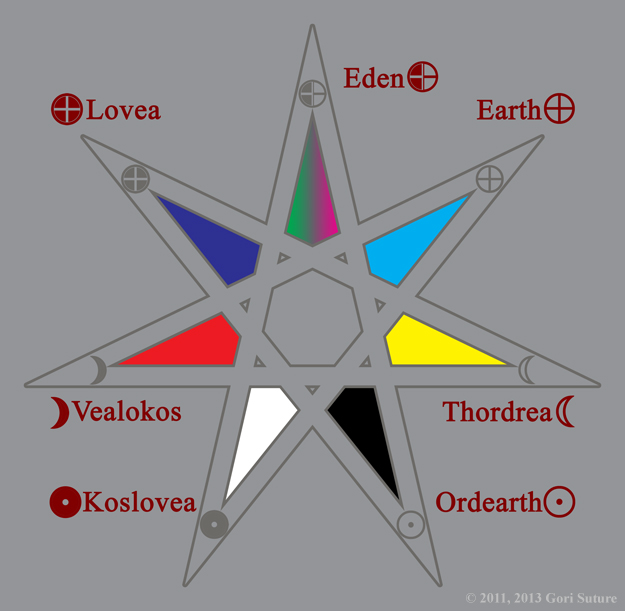 -3.) The Elemental External Contraction of The Greater Rose

A Kinder died, the gods of the elements. 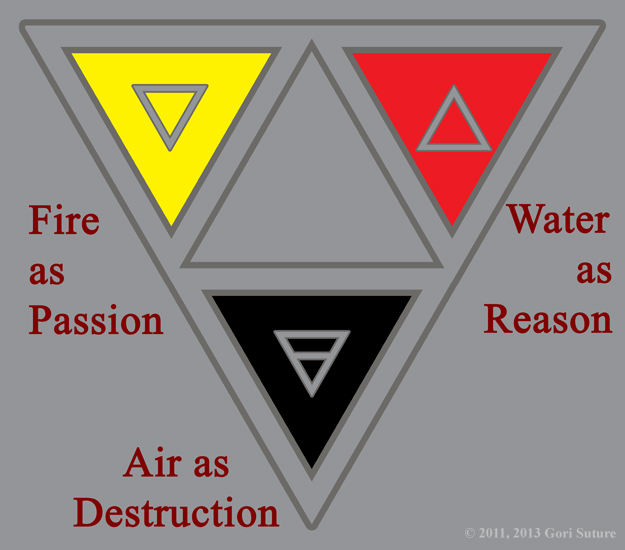 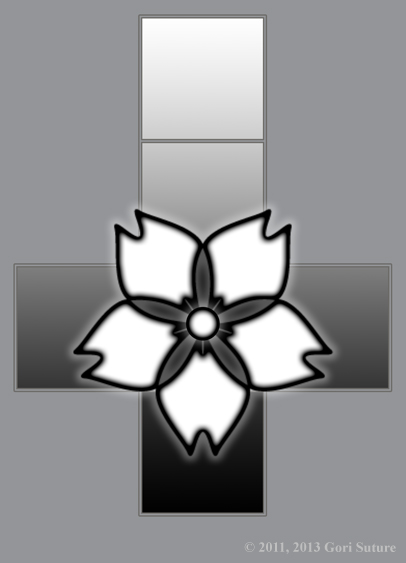 The inverted rose with five petals closes its bloom, hiding the Point at the center.  The cosmic seed of the macrocosm of Kinder and man is no more!

The QTOK is the death of the TOL.  Thus, the closing of the inverted five petal rose (the Five Pointed Star) is actually the death of the upright Five Pointed Star.
If the five pointed star represented the triumphant Will of Paradox as It manifested (not materializes) into the echo-phase of being, then the closing of (death of) this bloom represents the triumphant Will of Paradox as it de-manifests, from the echo-phase of being back into that which it came from.  This is the consumption of the insubstantial/non-physical ideal of creation, the Sephiroth within Ain Soph, as well as Ain Soph Itself. (Atziluth in the Four Worlds)
The Negative Black Cube Stone. Folds up into a cube in three dimensional space.  Thus, The Negative Black Cube Stone. becomes the outer Dying Stone, concealing the Secret of Life Itself. (The stone is thyself.) 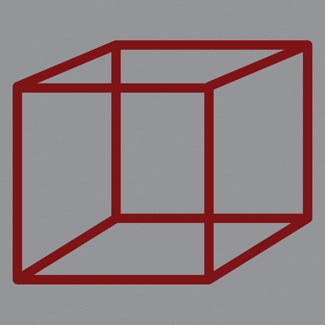 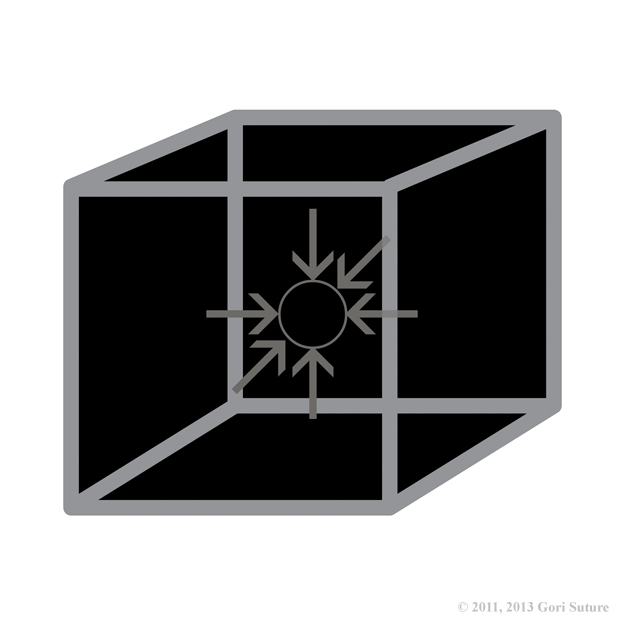 A Kinder died, a god of mathematics known as Volume.

A Kinder died, a god of mathematics known as Angel.

The Line began to shorten.  In this way, the metaphoric walls of infinite right(Masculine) and infinite left(Feminine) collapsed.
Consequently, the second Euclidean dimension fell out of existence.

A Kinder died, a god of mathematics known as Line.

The concept of “down(Feminine),” was forgotten, and thus the Line became a Ray, contracting upwards from the infinite downwards, collapsing the metaphoric floor of infinite depth, and the vertical axis was undefined.

A Kinder died, a god of mathematics known as Ray.

In this manner, the Point collapsed inwards in one direction, to the finite singularity, as the last Ray.

Kinder died, the first gods of mathematics, known as Numbers, Division, and Dimension.

It was, is, and shall forever be the True Name, The Word of outward de-manifestation, which brought Itself (as Paradox) into non-Being.

After.  After everything.  After the big collapse.  It ended with a single Point of negative light.  A true point of 0 Dimensions.  This Point was a unique singularity of non-being.